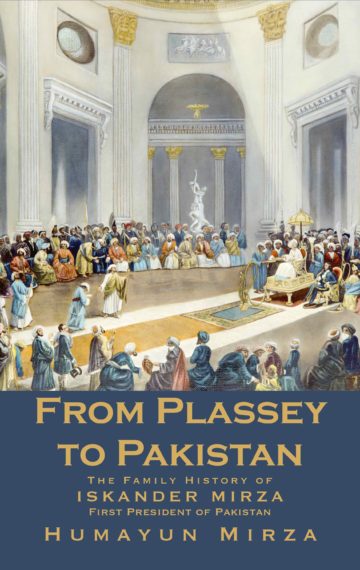 In this sweeping historical survey, Humayun Mirza traces the fortunes of his ancestors, the powerful rulers of Bengal, Bihar, and Orissa, whom Robert Clive defeated at the Battle of Plassey in 1757. Turning next to the colonial experience of India under British rule, Mirza describes the long struggle for independence that ultimately led to the partition of India and the birth of Pakistan. With its subsequent focus on the career of the author’s father, Iskander Mirza, first President of Pakistan, From Plassey to Pakistan offers the reader a comprehensive picture of a politically volatile region that remains at the very center of our global consciousness.

Humayun Mirza is the last of the Bengal princes and the only surviving son of first President of Pakistan Iskander Mirza.

Praise for From Plassey to Pakistan

“The book throws light on the goings on in Bengal, Bihar and Orissa during the formative years of the British Empire detailing the intrigues and guile the British adopted in exploiting the weakness of the Nawabs… a very informative and interesting treatise on the creation and growth of Pakistan, its relations with India and other countries… The appendices, and ‘notes’ on different chapters, add to the value of this book.”

“Written autobiographically by his son, the book’s credibility lies in the warts-and-all treatment given to the author’s father.”

— The Friday Times of Pakistan

“Humayun Mirza’s work is touching in that it portrays the father rather than the politician.”

“…a very interesting and different kind of story…”