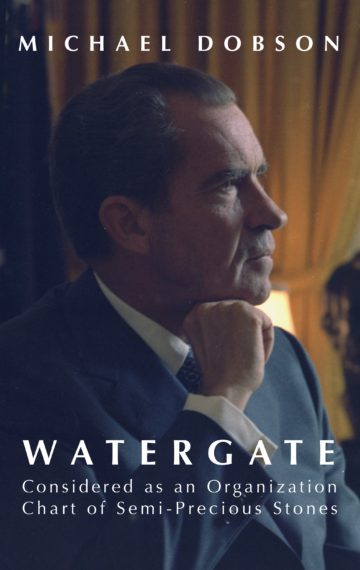 “Even Napoleon had his Watergate.”      Yogi Berra

Everything you ever wanted to know about the Watergate scandal (but were afraid to ask!) In this light-hearted yet insightful tour through the Nixon White House, the Committee to Re-Elect the President, and the various investigative committees, you’ll meet fascinating characters from Richard Nixon himself to such lieutenants as a G. Gordon Liddy and John Dean. You’ll gain insights into the origin of the scandal, the motives of the players, and how the situation spiraled so badly out of control. Essays include”

…plus, a Watergate Cast of Characters and Timeline! Illustrated with photographs, cartoons, diagrams, and political memorabilia, Watergate Considered as an Organization Chart of Semi-Precious Stones is a delightful addition to anyone’s collection of political books. Watergate was never like this!

(Some of this content also appeared in Random Jottings 8 and Random Jottings 9, both available under “Magazines and Special Publications” on this website in print and free PDF form.)