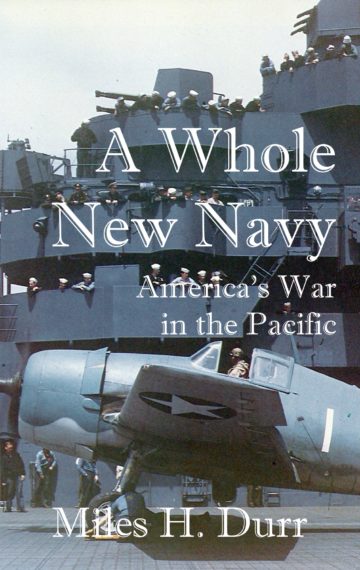 The most comprehensive and detailed description of America’s naval war in the Pacific ever! Every battle, every ship, every task force and every task group from Pearl Harbor through the Japanese surrender is covered in great detail. This scholarly yet entertaining volume is a must-have for everyone with an interest in the who-what-where-why-when of World War II in the Pacific.

Here’s what others say:

“Given stacks of books and personal memoirs about the Pacific War, one may question how more information might make a meaningful contribution. Miles Durr’s work answers that admirably.   With a minimum of distracting  personal opinion he captures the facts, when they happened and what ships were engaged. His work should be especially helpful for others trying to bring order to the confusing volume of work on the subject. It  will be useful for both confirming and refuting bygone historical events, as well as a guide for future authors.   The sheer sparseness of his writing lends authority for both young researchers and aging veterans who were there, but whose memories may be dimmed by the fog of time. Durr’s thorough research should be applauded.” — Floyd Beaver, survivor of the aircraft carrier USS LEXINGTON, sunk in the Battle of the Coral Sea, 1942 ”

An essential work in my World War II library!” — Michael Dobson, author of MACARTHUR’S WAR: THE INVASION OF JAPAN